During the 1920s and 1930s, Dr. Rife invented the "Rife Machine"-a device that delivers low-energy electromagnetic frequencies to the body with the intent of improving the health of the individual. This device was developed based on the work of an American physician, Dr. Albert Abrams. Basically, Dr. Rife believed that all organisms have their own, unique electromagnetic signature or frequency. He found that microorganisms were particularly sensitive to their specific "bio-frequencies" and could be destroyed by bombarding them with this frequency. Since the wave is tuned to the frequency of the microorganism, only the pathogen would be affected, leaving the surrounding tissue unharmed. Records indicate that Dr. Rife was able to discover the frequency of 24 microorganisms, which included herpes, polio, pneumonia, syphilis, influenza, and typhoid.

In 1932, Rife discovered a virus in a breast tumor that he called Bacillus X (BX) virus and observed that this virus could change shape according to its environment. He introduced the BX virus into rats and found that large tumors developed. Later, he exposed the tumors to the resonance frequency of the BX virus and noticed that the tumors disappeared. Because of these amazing discoveries, Dr. Rife was approached to use his technology on human patients, and in 1934, a human trial was conducted at Pasadena County Hospital with 16 terminally ill cancer patients who were examined by a team of distinguished physicians and pathologists. The treatment involved two 3-minute sessions per week. After 90 days, the research team found that 14 of the patients were cured of cancer and the other two were cured after another three weeks of treatment. In 1939 Dr. Rife was invited to speak to the Royal Society of Medicine about his findings, which it approved. However, unfortunately, shortly thereafter Dr. Rife found himself under attack by the American Medical Association (AMA), which banned the use of his machine to treat patients. To make matters worse, not long after, someone broke into Dr. Rife's office, destroyed his machine, and stole all his papers and research. Supporters of Dr. Rife's work were bribed, and the medical journals, which are controlled by the AMA, refused to publish any articles using Dr. Rife's therapy. Within a year, Dr. Rife's career was destroyed. To this day, it is still unclear why the AMA turned its back on Dr. Rife, although many believe he has ties to the pharmaceutical industry.

With this device, we are trying to revive Rife's discoveries in the hope that in time he will receive the recognition he deserves for his groundbreaking inventions. 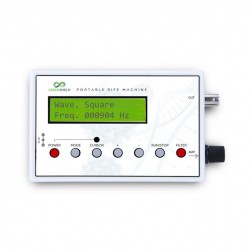 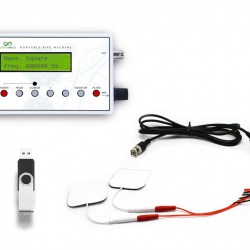 Model: PRM-2023
MINI RIFE MACHINE
To obtain more information, do not hesitate to write to us by sending an email to: info@green-shield.eu OR via WhatsApp..
269.00€
Ex Tax:269.00€
Add to Cart
Add to Wish List Compare this Product
Buy Now Ask Question
Showing 1 to 1 of 1 (1 Pages)